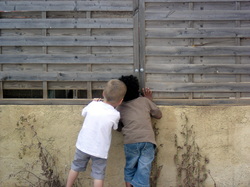 Click above to see more pictures
Joe was stationed in Germany when he was in the U.S. Army from 1967 to 1970.  During that time, he visited the country of France and discovered that, for the most part, the French did not like Americans very much.  Because of this, Joe never had the desire to go back to France.  But God can change our desires.

In January 2003, Joe ministered at a convention in Canada.  While there, he met a French apostle.  Even though the man could barely speak English, he invited Joe to come to France to minister in a convention there.  Joe agreed to the invitation.

Joe and Rob, a man who attended the same church as Joe, traveled to the 2003 convention in Toulon, France. Toulon is a resort city on the French Riviera.  Joe met Francky and Valerie, a couple who attended a church in Toulon.  They gave Joe a good tour of the town. Little did Joe know that Francky and Valerie would establish their own church a few years later.   In 2010, they would invite him to come and minister prophetically at that church.

Joe and Rob and another brother prophesied over people at the 2003 convention.  Joe ministered from Acts 2:17-18 about the outpouring of the Holy Spirit. In this scripture, the Apostle Peter refers to the prophecy by the Prophet Joel.  A brother was there from Algeria.  He had a vision of fire sweeping through his country.  As you know, Algeria is very resistant to the Gospel of Jesus Christ.  This was a very significant vision.

Francky invited Joe to come to France to minister again this year (2012).  Francky asked Joe to have prophetic oversight over the church that he is pastoring in Toulon.  Ministry in France opened up through one invitation and is building into a lasting ministry opportunity.
France Missions Donation>