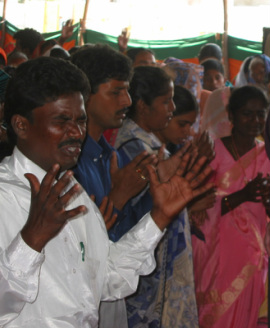 CLICK ABOVE TO SEE MORE PICTURES
In 2001, a brother in the church that Joe and Joyce attended told Joe and that he had had a vision.  In this vision, he saw both Joe and himself going to India to minister to the people there. In 2003, a family ministry team in Hyderabad saw the FAMI website and contacted Joe to come to India and preach at crusades.  Joe, along with C.J., (a brother from the church) and Rob (who worked for the ministry) believed that the Lord had called them to go to India together.  The church gave them support for the trip.  God inspired Joe to fast nine days (three days at a time for three weeks) before he traveled to India.  The other two men joined him in the fast.  Rob’s mother had a vision of a bubble that covered all three of the men.  This represented the Lord’s protection over the team as they traveled.

In November 2003, the three men traveled to India and teamed up with Pastor Yesuratnam.  He is an apostle who oversees several churches in India. His family organized a three-day crusade in Hyderabad.  Thousands of people attended the services; pastors traveled from different parts of the nation to participate in a pastors’ conference.  In one meeting, the Lord gave Joe a word of knowledge that God was going to heal someone with kidney problems.  A woman who needed a kidney transplant was there.  God healed her.  Joe encouraged others with words of wisdom from the Lord.

In September 2009, Joe met Kamal, a young man from India who attended Hosanna Church in Stillwater.  God gave Joe a vision of the two of them traveling together in the ministry.  This seemed good to Kamal as well.  Joe was preparing for another ministry trip to India in November 2009 when Kamal’s father died unexpectedly in October.

When the two traveled in India, God opened up a new youth ministry (Youth Unified) in a Brethren Church in Hyderabad.  Joe prophesied over the leadership team. Now, the youth have been meeting every week for several months and have been praying together daily. One of the members of the leadership team was Kamal’s sister, who is now operating in the gift of prophecy. God is blessing this ministry mightily.

Joe prophesied over Vikas (the brother who hosted Joe in November in India) and Kamal that God was going to bring them both to the United States.  God performed this miracle. Upon Joe’s invitation, Kamal moved in with the Schrader family and has been living with them since January 2009.

Joe and a brother named Seth are planning to travel to India in 2011 in order to spend time with the Youth Unified and to equip them to reach the youth in the surrounding area. They are willing to speak at pastors’ and leaders’ conferences around Hyderabad. We appreciate your prayer and financial support to reach the people of India with the good news of the Lord Jesus Christ.