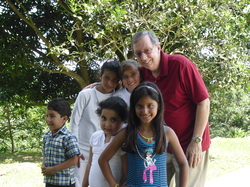 Click above to see more pictures
In 1984, Joe and Joyce met a brother by the name of Ivan.  He was a student at Oklahoma State University. He became good friends with the Schraders.  Upon graduation, Ivan returned to his home country of Venezuela.

After several years, Joe got in touch with Ivan through an email contact.  In December of 2000, Joe and Joyce went to visit Ivan and his wife Belkys to encourage them.  In 2001, Joe and his daughter Hannah visited Ivan and Belkys. The couple now had a son, Samuel.  Joe ministered in a few meetings. He also ministered  at a church that had been started by an American.

In 2002, Joe and his pastor at the time visited Venezuela.  They met with the pastor of the church Joe had ministered in before.

At the end of 2010, Joe encouraged Ivan to start working with a pastor in the area.  Joe gave a word of wisdom to Ivan that he was to begin having home meetings at his farm. Ivan and his pastor waited on the Lord in prayer and fasting and decided to do this. As of June 2011, eight people who are new believers are attending these meetings each week.

Joe and Joyce believe that God has called to them to minister in the country of Venezuela.